Cleveland Avenue within the city of Newark, Delaware is a critical thoroughfare for the city’s 35,000 full-time residents, University of Delaware’s 25,000 students, and a significant number of “cut-thru” commuters, which has resulted in level of service “F” intersections at each end. Newark’s Cleveland Avenue Task Force (CATF) commenced in March 2016 in response to DelDOT’s Hazard Elimination Program (HEP), where a four-year study was conducted on Cleveland Avenue, bringing light to the staggering number of crashes – 358 total. The CATF was formed to diplomatically combine local input from city business owners, advocacy groups, and elected officials to tackle the safety problems along state-maintained Cleveland Avenue.

After a year and a half of City Council meetings, public involvement, and further traffic studies, an impressive tally of multimodal safety upgrades was decided upon – prohibition of on-street parking paving the way for bike lanes; pedestrian scramble serving over 1,500 college students on-foot during each class change; new signal and elimination of turn restrictions on a “diversion route”; downsizing a 5-leg intersection to an 8-phase signal by converting a local street to one-way; new right-turn overlap phasing; road diet with two-way left-turn lane and bike lanes; and mid-block crosswalks with refuge islands and RRFBs.

The road diet was implemented arguably three years ahead of schedule. DelDOT and Newark seized an implementation window that required full engineering plans to be turned around within two weeks, and, subsequently, the contractor then had three weeks to “get off the road” before the city’s population nearly doubled (i.e., fall classes resumed). Once the construction schedule and notices were publicized, DelDOT and city officials faced an onslaught of public questioning, media requests, and social media attacks. After construction began, the skeptics’ population size continued to grow, and they were not afraid to voice their opinions. As a public concession, DelDOT and Newark both reminded the concerned mass that the road diet striping could be reversed if the safety and capacity metrics indicated that the improvement was actually regression.

So where do things presently stand now, roughly one year post-construction? During the peak surges within the evening rush hours, the road diet’s processing rate (capacity) is about 150 vehicles per hour higher than the former four-lane roadway, while the western-most critical intersection processes 325 more vehicles per hour. Most importantly, DelDOT and Newark have shown restraint and humility as the public perception component of the CATF has come full circle. In lieu of flaunting the “before” versus “after” metrics, the engineering and public works team continues to be responsive and receptive to first-hand input, inquiries, and suggestions on how to further balance safety and operations along Cleveland Avenue for competing modes of travel. 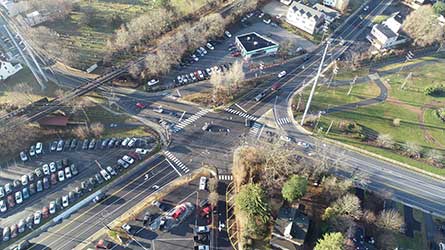