Baltimore, MD – On April 30, 2014, following heavy rains, a block of E. 26th Street collapsed onto the railroad tracks below, taking with it eight cars, streetlamps and a portion of the roadway as well. May 22, 2015 was the official opening of E. 26th Street, which had collapsed over a year ago. Whitman, Requardt and Associates, LLP took part in the ribbon cutting ceremony on Thursday, June 4th, 2015.

“We are very pleased today to be here to announce that we are moving into a mode where we’re completed with the construction on this roadway and where we’re ready to officially restore this neighborhood and turn it back over to the residents,” said Department of Transportation director William M. Johnson, during the June 4th news conference. Johnson continued saying, “It took months of extensive excavation, slope stabilization, pile driving, drilling, concrete work and other aspects of construction to restore and reinvent this retaining wall.” Construction of the retaining wall and street went well into the bitter cold winter months and into early spring where final paving was completed.

Whitman, Requardt and Associates, LLP was called to respond to this emergency, under an on-call contract with the Baltimore City Department of Transportation. WRA engineers responded quickly and assessed the damage throughout the night. During the emergency phase of the project, WRA staff provided onsite support 12 hours a day, 7 days a week to complete the repairs as quickly as possible. In addition to this initial response, WRA provided design of a final temporary work plan to initially stabilize the street and the area in front of the houses, coordinating utility designs and replacements, design and construction of the permanent concrete retaining wall and street reconstruction. 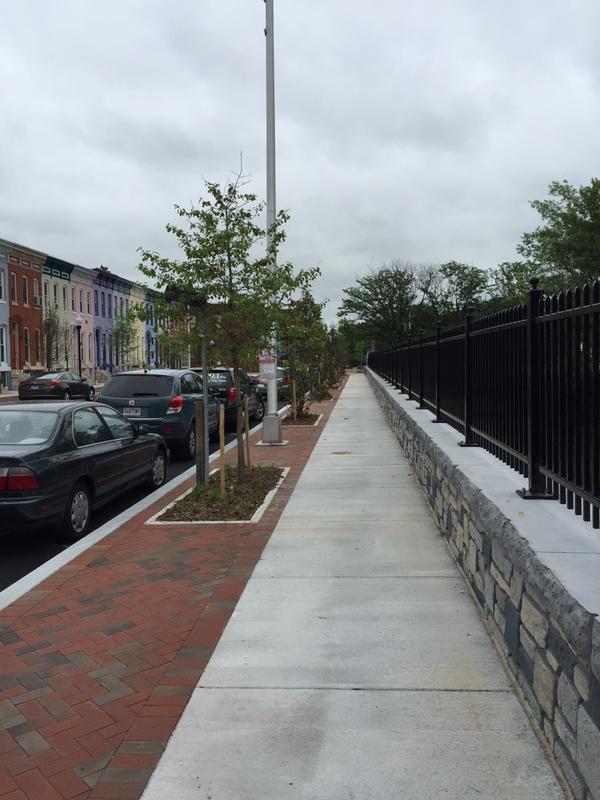